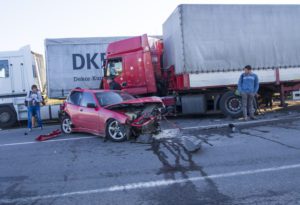 A truck accident lawyer Cheyenne, WY families recommend understands that there can be nothing more intimidating for a person who is driving down the highway to suddenly see a gigantic tractor-trailer barreling up behind them or beside them. Given the catastrophic damages that are left behind in a truck accident, it is no surprise that so many truck accident victims end up dying from their injuries. Those who do survive are usually left with devastating permanent disabilities. At Davis, Johnson & Kallal | Wyoming Law, we fight diligently to get victims and their families the financial compensation they deserve.

Several years ago, the National Highway Traffic Safety Administration (NHTSA) conducted one of the most comprehensive studies on commercial trucking accidents. The NHTSA utilized data from all of the truck accidents that had occurred in the U.S. during a 33-month period – approximately 120,000 of those accidents involved at least one fatality and one tractor-trailer.

One of the facts the study revealed was that there were three common reasons why these fatal accidents happened:

A Cheyenne truck accident lawyer is aware of other alarming information that the NHTSA study discovered that when the truck driver is at fault for the crash:

Other common factors in fatal truck accidents found by the study researchers were:

Even if the truck driver is at-fault for the accident, the trucking company can also be held liable. This is what often makes these cases more complex than other vehicle accident cases.

If you have been injured in a truck accident or have lost a loved one in a fatal truck crash, you may be entitled to pursue damages against the party or parties for the losses your injuries have caused. Contact Davis, Johnson & Kallal | Wyoming Law to schedule a free consultation with a Cheyenne truck accident lawyer.

If you or your loved one has been seriously injured through the negligence or misconduct of another, you are entitled to full compensation for the losses you suffered.

Davis, Johnson & Kallal is proud to be a Wyoming law firm. You can find city specific services below.